As far as professions go, if you haven’t noticed, speech therapy and writing aren’t really related (unless you count writing boring letters to doctors and insurance companies). When I got the idea for Escape from Differe, this former speech therapist put it in a file titled “story” on my computer. I knew I was a good storyteller, but was hardly ready to call the idea a “book” or, least of all, me a “writer.” So, the what-would-later-be-book sat there as the “story” file for quite some time. Perhaps my reasons were twofold: 1) if I called the file a “book” I’d have to pursue the publishing process, which felt like I would be agreeing to learn Chinese; 2) if the idea really was a book then what did that make me?

I couldn’t claim the “writer” title for a really long time. When I looked at myself in terms of writing I saw zero formal training, a C+ (the last grade I’d received on an English paper), and the VERY close relationship I had with spellcheck. Lest you think I’m exaggerating about my dire grammatical skills, the earliest feedback I received went something like – “The story is awesome, but I think if it’s going to be a book it’ll need to be more than one paragraph. Oh, and remember those things called ‘commas’? There should probably be a few of those in there too.” (Paragraphs and commas are still so overrated in my mind)

In the spring of last year, I had ten readers and a writing coach telling me I was a “writer.” This was good news considering I’d finally decided to change the file name from “story” to “book.” It was time to start thinking about changing professions, which would mean changing my job title as well.

Sometimes you’ve got to see and say things a few times before you believe them. Hence the following: 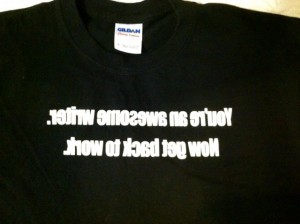 Stand in front of the mirror and it reads – “You’re an awesome writer. Now get back to work.” 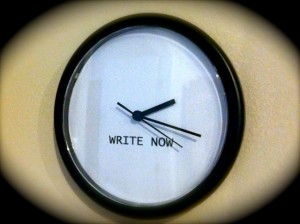 I somehow discovered I’ve got a knack for writing, but a few weaknesses in the areas that make writing great. But you know what…who cares? Those weaknesses don’t make me any less of a writer. In fact, they just give me the opportunity to become better at what I do.

I am a writer.